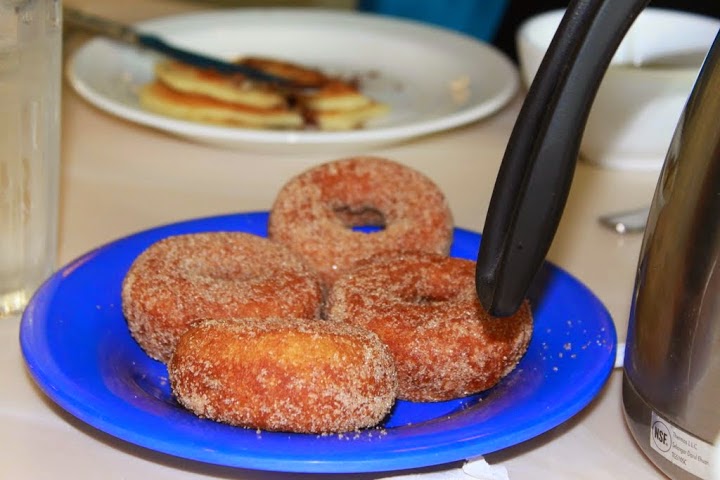 You certainly wouldn’t ever guess it, but in my real life, I am a healthy eater. In Disney World, I consume crazy amounts of food, and what better place for that than the Crystal Palace. The chef came over and showed us what was safe to eat from the buffet (which was quite a bit). There were many gluten free dairy free options. I notice the flavors of potatoes and eggs change from trip to

trip, but there are still many choices.  Something new for me was the quinoa apple hot cereal. It was … weird.  I like quinoa, but this was a bit odd. It was soaking in water, like a water based soup. There was way more water than necessary for the amount of quinoa, which was just strange. The flavor was a little odd, too. It was ok, and if I didn’t have a plate full of delicious alternatives, I could have eaten it. But I let it go in lieu of the monstrous plate of food to the left.

The chef didn’t offer anything else at first, but my daughter asked if he could make pancakes. She loves gluten free pancakes for breakfast here! He said they had Van’s waffles, which we politely declined and he said he would look for a pancake mix. Lucky for us, he found what he needed and he made a double order of chocolate chip gluten free pancakes. A few minutes later he brought us out some donuts, so we were well fed and spoiled with options!
I used the rice milk in my coffee, and we enjoyed our breakfast so much. Also, our server was very nice, and the characters are darling, as ever. This is still my favorite 8am breakfast stop in Walt Disney World!