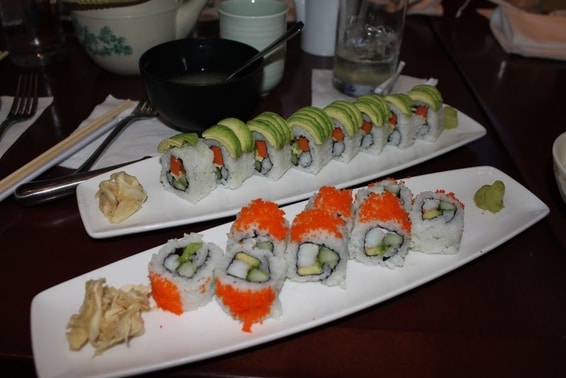 We began our reservation by waiting for about 10-15 minutes to be seated for our 6:40pm meal. Once seated, I was surprised how loud and busy the restaurant was. I don’t know why I had the silly notion that it would be zen like! This was Disney during Thanksgiving week, after all.

Our servers were very friendly and helpful. On the dining plan, they advised we choose two of the gluten free sushi rolls as our entree, and miso soup for an alternative to the dessert as they did not have a gluten free dairy free dessert option. I was pleased with that, as a warm bowl of soup sounded quite nice. A bottle of gluten free soy sauce was brought to the table. 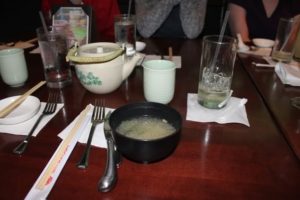 The miso soup was fine, the tea was nice, and the dinner was fun and enjoyable. The sushi tasted the same as the quick service option in Epcot, but with many more choices. If you love sushi, I recommend this. The dinner did take a VERY long time, and I had forgotten how sprawling Disney Dining can be. I was getting a little anxious to leave when the staff came out with a candle in a cup of fruit singing a happy birthday song in Japanese. That was very sweet and we all enjoyed ourselves quite a bit.

There was only one area where I was confused and that was in paying the bill. With the dining plan and a party of 8, I am used to tip being included, but it appeared they did not include the tip. I went ahead and added the recommended amount, but later when looking closer, I believe they did include the tip in the first place and I double tipped. Oh well, good karma will hopefully come back. They were very busy and working hard, so it is not a waste. I found the receipt there didn’t match what every other dining establishment gave us while we were in Disney, so just look carefully at those numbers and enjoy some sushi! 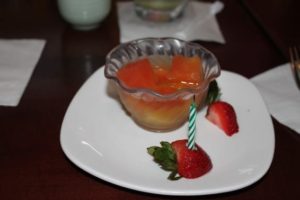