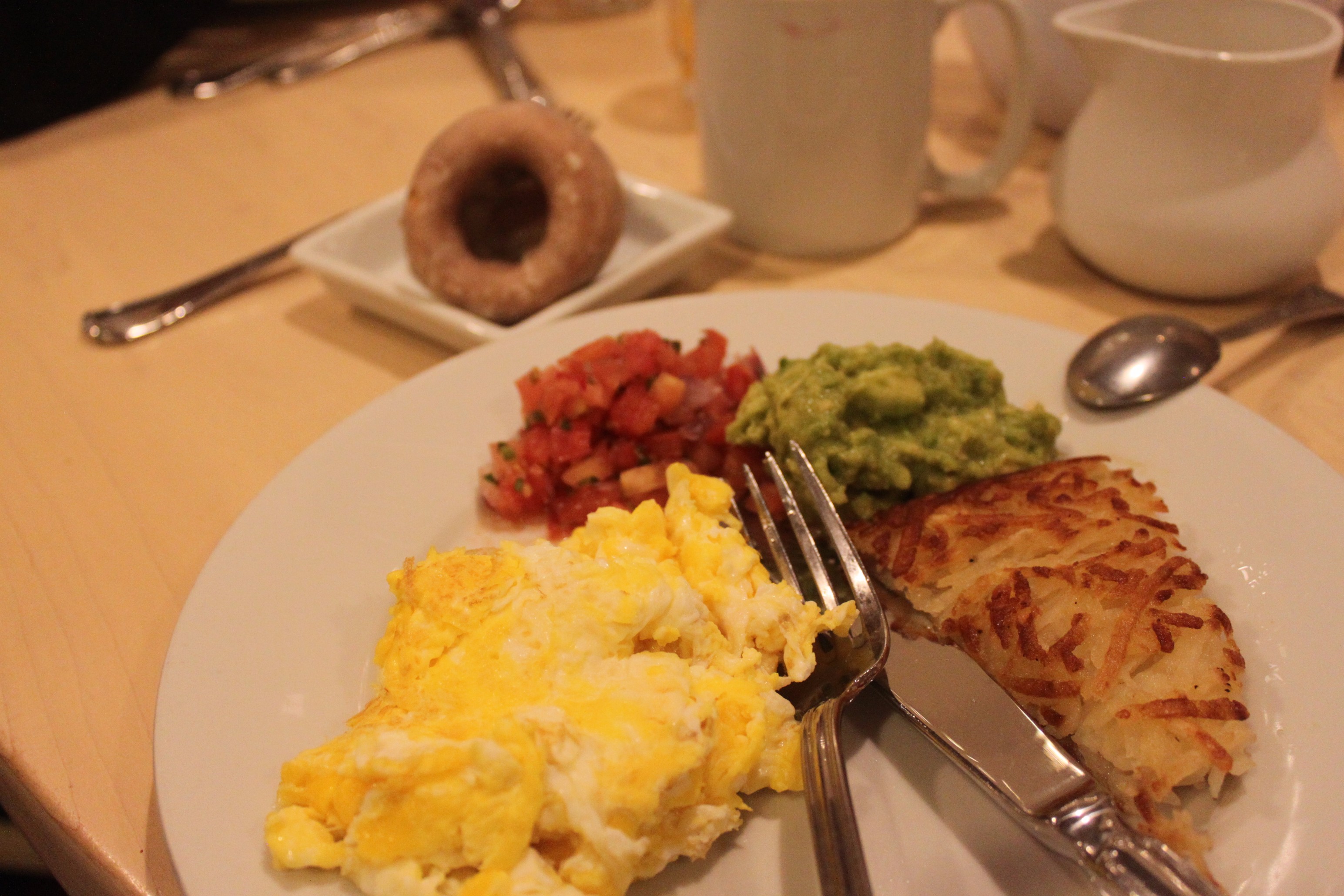 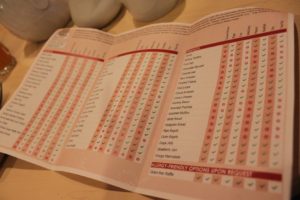 I have mentioned that Disney was trying very hard to avoid bringing a chef to the table and, for the most part, it was working well. There were a few times during our trip that the servers were not aware of the full options and the experience at 1900 Park Fare was one of those times. First, though we had a reservation, I had to wait in an awkward slow and long ling to check in. This took approximately 20 minutes, and made little sense to me as there were 3 staff members doing nothing behind the only 1 staff member checking people in.

If you plan to do something after this meal, give yourself at least 2 hours for the experience!

Once checked in, I was handed this chart and told to review so that we could choose our low allergen options. Um…really? I need a desk to sit down and study this thing! And there is more on the back. After looking at this for a moment, I tucked it away deciding that was not incredibly helpful.

Once we were finally inside (another 10 minutes after check in), our server was rushed. She told everyone to go get food, including those with allergies and she instructed us to use the chart if we had any questions. She was about to sprint away when I stopped her and asked for some rice or soy milk to use with my coffee. I am pretty sure she rolled her eyes at me. It was a bizarre encounter. She obviously did not want to deal with allergy requests. I also asked her to bring a chef to the table, and here is why. The server said my options were on the buffet and identifiable by the chart. I know that is not true and that there are other options to help expand our breakfast experience such as donuts, low allergen milk, low allergen pancakes. We have dined here many times and the server was not prepared or willing to suggest any of those for us. She was happy with us fuddling through with a complicated chart and a buffet that was ripe with cross contamination. In this way, Disney has gone downhill in an effort to streamline a system. The problem is that this system is what had previously set them apart from everyone else and put Disney Dining in a class of their own. Now, you are back to fighting for yourself in an attempt to get a fair option from servers who may or may not have a clue about what is happening in the kitchen.

The woman brought out my soy or rice milk in a container that looks exactly like the container for the regular milk and I made that mistake the last time we were here, so I moved them far apart on the table instead of side by side. I mentioned it to her and she sharply told me they were different. Ok. So far I am not in love with this server and while I may sound rather picky, keep in mind how much our party of 8 is spending on a breakfast here and how limited my options would be if I didn’t make a few requests, and it may make more sense. 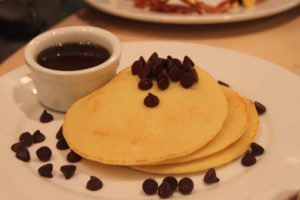 The chef who came to our table was very nice and we knew what we wanted so we didn’t need to waste her time. I just let her know we would be delighted with gluten free pancakes for the teen and safe eggs that were dairy free as well as a gluten free donut for myself. Easy! They brought out those items for us and we managed a few things from the buffet that looked to be safe from spills of cheese and sour cream.  As the breakfast potatoes were not available this trip and had been replaced with tator tots (that is an odd one!) she also offered to bring out gluten free dairy free hashbrowns, which was very nice. 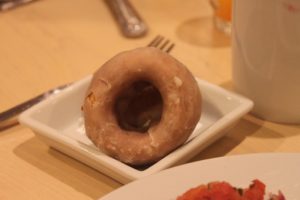 The servings for these items can be very small as this is a buffet and they imagine you will be eating many things off the buffet, so I make a point to ask for a full serving of pancakes as this is primarily all that my older one eats here. That works out well. My point, as you can see, is that you just have to ask and advocate for yourself as they will not be doing it for you in the same way that they used to. If you are not used to the old system, this will not be of issue, but you also may not know that you can ask for options that your server may not be aware of, such as those mentioned here and in other recent posts.

If  you are comfortable asking for what you need, you will be delighted with the options (except for desserts…which have dwindled for those who cannot eat dairy or gluten). And, as always, the chefs are wonderfully helpful if you get the opportunity to talk to them. Our server continued to be rude and rushed throughout our meal and I was annoyed at her ability to detract from our happy day, but I also know this is rare at Disney as most Cast Members are amazing and we paid and moved along. 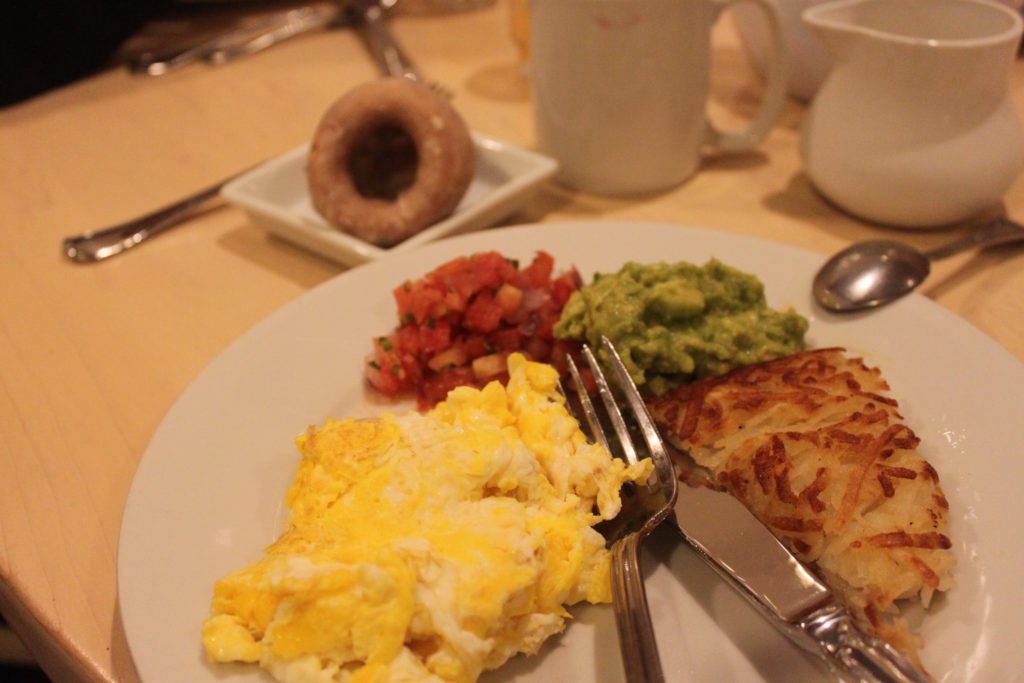 The character interactions were fun and the Mad Hatter stole the show! That tiny image is one of me with Alice during our breakfast where we just happened to be thinking along the same lines of fashion! The Tigger and photographer on the exit were great, too. You’ll always have fun with the characters at 1900 Park Fare!